"THE MEAT PUPPET" was screened as part of the Hoboken International Film Festival on June 4th, 2013 @ the Paramount Theatre.
Click HERE to read an interview with Producer Blaze Kelly Coyle printed in the Garden State Journal. 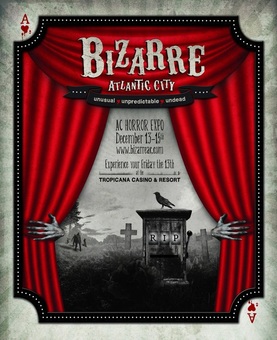 "The Meat Puppet" was featured in the Bizarre AC Horror Expo in Atlantic City, NJ on December 14th, 2013.

"The last film delivered, on Saturday night, fittingly named The Meat Puppet, by the devious mind and skillful hands of director Joe Valenti.  Hands off, this film truly had a classic horror theme embedded into itself, with a heavy coating of story and meaty characters.  Characters Andrew Shelton and his mother Claire Thomas, portrayed by Keith Collins and Geri Reischl, carefully pull each other's strings as they play a twisted game of finding the perfect woman.  Keith's mesmerizing style fills the screen and delivers with sadistic pleasure to the audience while he struggles to remain societal normal. But his lusts and hunger for women wages mightily hard on him, forcing him to tease and torment beautiful women into pieces of meat.  Joe acquires an elaborate cast for television stars, April Hunter, Blaze Kelly Coyle, and one musician, Ron "Bumblefoot" Thal of Guns 'N' Roses, excelling his production values and giving refine precision with his vast filmmaking experiences.  In addition, Brandon Rucksdaschel portrays a stubborn detective and creative suspects that Keith's character of wrongdoing and giving him a bad taste in his mouth in many ways.  Horror fans long clamor for a return to true horror, less shock more substance, storyline, and characters one roots for, than the customary paper thin ones common today, then this feature is definitely something for one to chew on for one epic meal."       Read Craze's full review here.